Sámi villages declare moratorium on mining in the Nása area 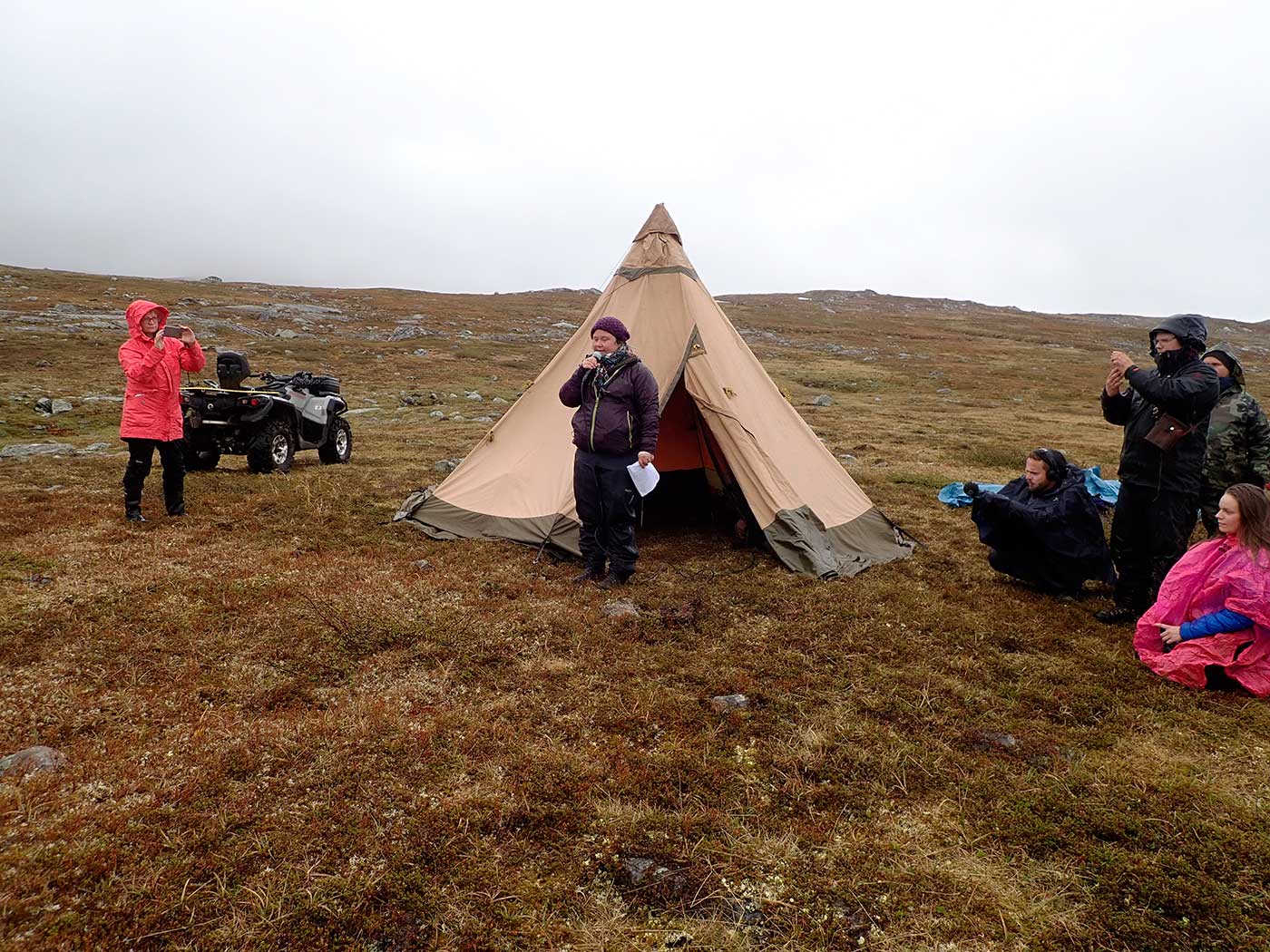 The Svaipa, Grans and Semisjaur–Njarg Sámi villages and the Saltfjell Reindeer-Herding District have declared a moratorium on mining in the Nása mountain, a border area between Sweden and Norway. «This is a clear statement from the reindeer-herding villages. The goal is to prevent mining on Násafjäll, both now and in future,» says Sara Ajnnak from the Svaipa Sámi village of reindeer herders.

The company Elkem AS has applied for expropriation of rights on the Nása Fell in order to open a quarry for mining for quarts. The Sámi are against such operations and have, therefore, declared a moratorium on mining in the area. The word moratorium means stopping a process or postponing activity.

«As far as I know, there’s never been a moratorium covering an area in Sweden before. In Tana in Norway, there’s been one, and logging has been stopped in Finland through a moratorium. Here, it means that we don’t want mining to be started here and that we’ll go on with our operations as usual,»  Sara Ajnnak explains.

The information on the moratorium was sent to the Norwegian Ministry of Trade, Industry and Fisheries in mid-June. It is unclear whether, and how, the declaration will affect the process of dealing with Elkem’s application for expropriation. In their press release, the Sámi villages and the Saltfjell Reindeer-Herding District say as follows:

“The Nása moratorium means that the use of land, water and air may in no way infringe the rights or interests of the Sámi in the geographical area of Nása. Thus, it is prohibited to launch any mining activities such as preparations, prospecting, road construction or other operations that disturb traditional reindeer herding in the area. These rules are going to be enforced by the Sámi villages until local Sámi self-government with reindeer herding as the primary form of land use has been incorporated in the Norwegian and Swedish laws, and until mining and other land uses that infringe upon rights and cause environmental damage are prohibited in the area permanently.”

«We have thrown the ball to them, and now we’ll see what we get back. We’ll take one step at a time, forward,» Sara Ajnnak says.

Below, the complete moratorium declaration concerning Násafjäll as an English translation:

Násafjäll in Sápmi is an area that the Sámi have used as grazing for reindeer from time immemorial. The area has been part of a sustainable ecological system, in which the Sámi have lived in harmony with nature, hunting, fishing and herding reindeer. Nasafjäll is situated in a region of high fells, which is surrounded by the River Laisälven, the upper reaches of the River Vindelälven, and the Vindelfjäll Nature Reserve. The weather up on the fells changes rapidly, varying between western winds, clear sky, rain, thundershowers and snowstorms, which means that the flow of water constantly changes. With heavy rain, new, temporary creeks appear, while, during dry summer periods, creeks and springs dry out. Those engaged in traditional livelihoods follow the variation of natural conditions, using the different areas of the fell for different purposes in the varying weather conditions.

Before the State formed Sámi villages and stole the land from the Sámi, Násafjäll was part of the Lapp tax-land, a Sámi privately-owned land that the owner paid taxes for; the tax-land was also a reindeer-herding area where customary law prevailed.

From a Sámi point of view, the region has a long and painful history. For almost four centuries ago, the State of Sweden discovered that the region had great value because of a silver deposit. At the time, Sweden was in economic distress, and the silver find was seen as a gift from above that would save the economy of the State. In 1635, a 65-year mining period started on the Nása Fell. At first, company miners were used as labor at the mine. However, it became clear quite soon that the miners could not cope with the rough working conditions of the area. Thus, local Sámi were enslaved and ordered to work at the mine. For a period of sixty-five years, many Sámi and hundreds of reindeer were forced to transport, with sleds, 860 kilograms of silver and 255 tonnes of lead from the Nása Fell to Silbojokk. The work put great stress both on people and animals, and the Sámi who obstructed the operation were tortured in order to make them more favorable to mining.

The 65-year mining epoch left environmental consequences that still have en impact on Násafjäll and Silbojokk. Four hundred years after the first active period of mining, the environment of both people and animals is still polluted by residues of arsenic, lead and sulfides, which makes the water in the lake undrinkable.

Launching new mining operations will increase environmental pollution in the Násafjäll area, making it impossible to maintain a sustainable ecological system. Elkem ASA is planning to start a quarry on the Norwegian side of the Nása Fell, which means that the company will open new wounds in a fell environment that is already extremely vulnerable. The quarry will change the terrain in the area through the construction of new infrastructure such as roads and buildings. Furthermore, the location of the quarry will mean that the discharge from the mine will naturally run towards Randalsvolden, which empties itself in the Rana River. Dust particles and sound travel far in a fell environment, and it is impossible to guarantee that contaminated material will not spread to the sources of the rivers Laisälven and Vindelälven.

In 1634, Axel Oxenstierna exclaimed ‘Within our territory, we have in Norrland our own India, provided that we are clever enough to use it’, referring to a northern colony. It meant confiscating land from the Sámi population for the benefit of the Crown. The Sámi that lived in the region became forced labor for the State of Sweden. In one respect, this colony was different from many other colonies in the world: in Sápmi, Sámi self-government was never established, but the land was confiscated by the State and has been controlled by the State ever since. Now, a mining company is about to run over the Sámi population with the blessing of the State of Norway by starting unwanted mining operations that will pollute the environment on Násafjäll. This can only be understood as an act of aggression, another attempt to launch colonial measures without taking Sámi culture and the livelihoods of the area into consideration. Launching such mining operations will have grave consequences for animals in general and reindeer in particular and for the Sámi villages and the Reindeer-Herding District of the area, making it impossible to go on with reindeer herding on the Nása Fell. Furthermore, there is the risk that such operations will destroy a whole living Sámi social structure which does not only consist of traditional Sámi sources of livelihood: the operations may also cause damage to other trades, the Sámi language, upbringing, the care of senior citizens and all cultural activities that are part of the social structure. Therefore, the launching of mining operations on Násafjäll does not only destroy a fell and a livelihood, but a whole people, our community and our living culture. We will never let this happen!

In honor of ourselves and the history of our area, and of our ancestors who were enslaved and tortured on this very site, we have decided to protect Nása and our Sámi culture from a new act of aggression. We encourage you to do the same. Mining is not welcome here.

Hereby, the Sámi villages of Svaipa, Semisjaur–Njarg and Grans and the Saltfjell Reindeer-Herding District declare a moratorium that covers the region of Nása in Sápmi, despite the national borders drawn by the States of Norway and Sweden. The moratorium covers the whole Násafjäll, both on the Swedish and the Norwegian side of the border.

Thus, the Sámi villages and the Saltfjell Reindeer-Herding District hereby declare that they will protect the Nása Fell against further environmental harm in a vulnerable fell environment that has already suffered damage. Dust particles and sound travel far in a fell setting, and it is impossible to guarantee that contaminated material will not spread to the sources of the rivers Laisälven and Vindelälven, which are crucial water resources both for animals and humans in Sápmi.

The launching of mining on the Nása Fell according to Elkem ASA’s plans will make it impossible to practice traditional reindeer husbandry in the area. Therefore, launching mining is not in accordance with either international conventions on human rights, UN’s Declaration on Indigenous Rights (UNDRIP) or the ILO Convention No. 169 concerning Indigenous and Tribal Peoples in Independent Countries.

In the area, Sámi customary law prevails, and, from now on, the Sámi villages of Svaipa, Semisjaur–Njarg and Gran and the Saltfjell Reindeer-Herding District declare self-government in the geographical area of Nása. The use of this moratorium area must not infringe Sámi rights or interests. The Sámi have rights that have been established by conventions, declarations and recommendations, the constitutions of States, and the Sámi legal concepts and traditions.

This means that both the Swedish and the Norwegian legislation are declared invalid in the area until the mining plans concerning Nása have been withdrawn permanently and reindeer herding has been given priority as a form of land use in the area.

As long as these new rules have not come into force, it is prohibited to start any mining activities such as preparations, prospecting, road construction or other operations that disturb traditional reindeer herding in the area.