From suicide attempts to happiness and Sámi pride 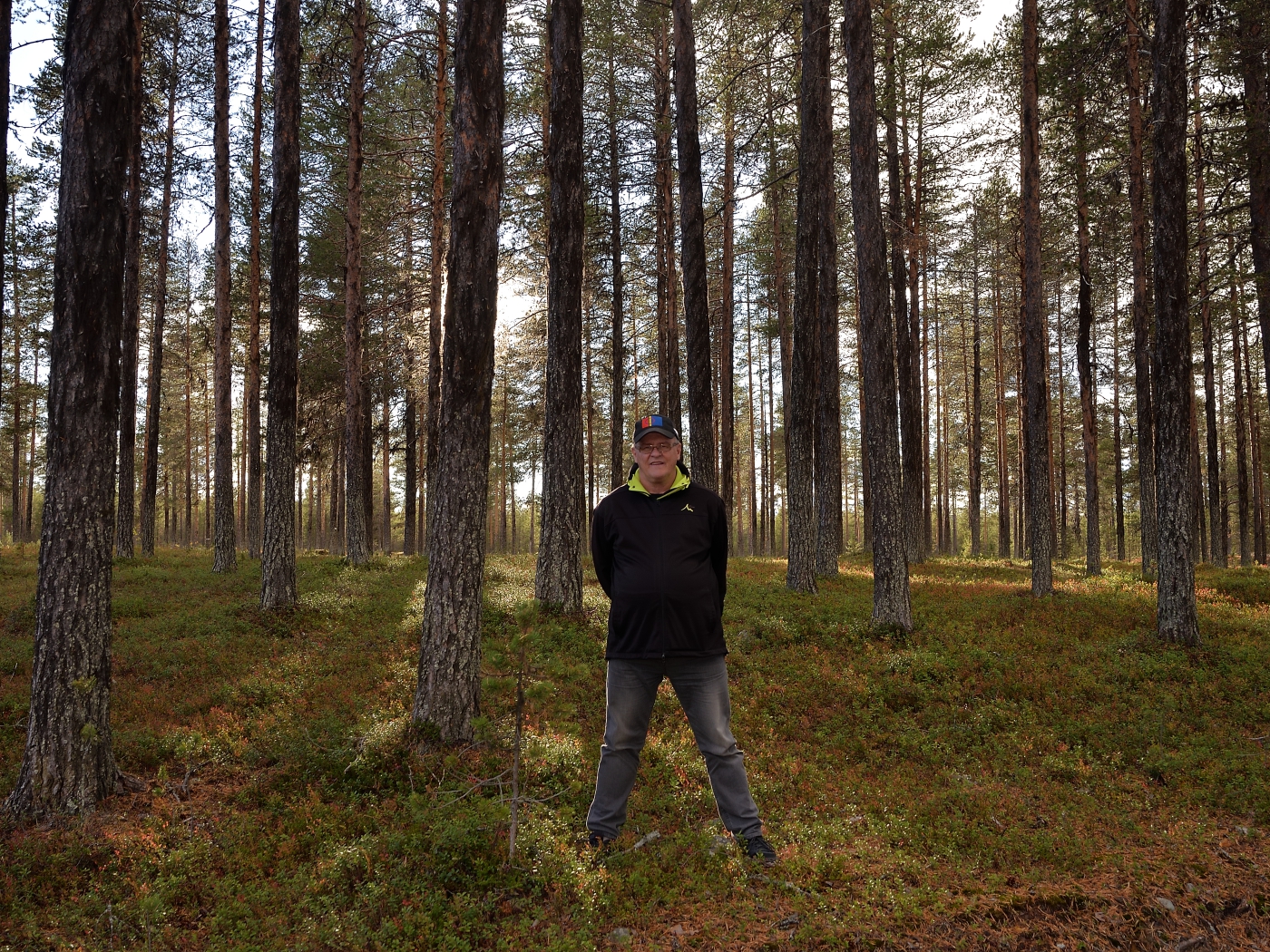 Life can be hell. But if you can talk about the things that lie behind the pain and dare to be the one you are, life can take a turn. Today, after years of mental health issues and two suicide attempts, Dan Eriksson is a proud and happy gay Sámi. Photo: Peder Lundkvist

Dan Eriksson, who is a proud gay Sámi today, knows what it is all about.

He has lived most of his life in denial about his true self, and he had to go through years of mental ill-being and two suicide attempts before he found the courage to talk.

Today, he wants to help others understand how important it is to be the one you are, to talk and to live.

Dan Eriksson was born in Arjeplog and lived the first years of his life in Laisvall together with his parents and six siblings. When he was ten, his father suddenly died of a heart attack, and the family had to move, as they lived in miners’ housing.

«Both my mother and father came from Arvidsjaur, she from Storträsk and he from Njallejaur. So when we had to move from Laisvall, my mother decided to settle in Arvidsjaur, and this is where I have stayed.»

Dan’s Sámi roots extend far into the past, but, for a long time, Dan was not especially interested in his background.

«I didn’t grow up or go to school in a Sámi community. I can’t speak Sámi, and I still don’t feel completely comfortable wearing the Sámi dress. But today, I’m proud of being Sámi, I’m a proud gay Sámi.» 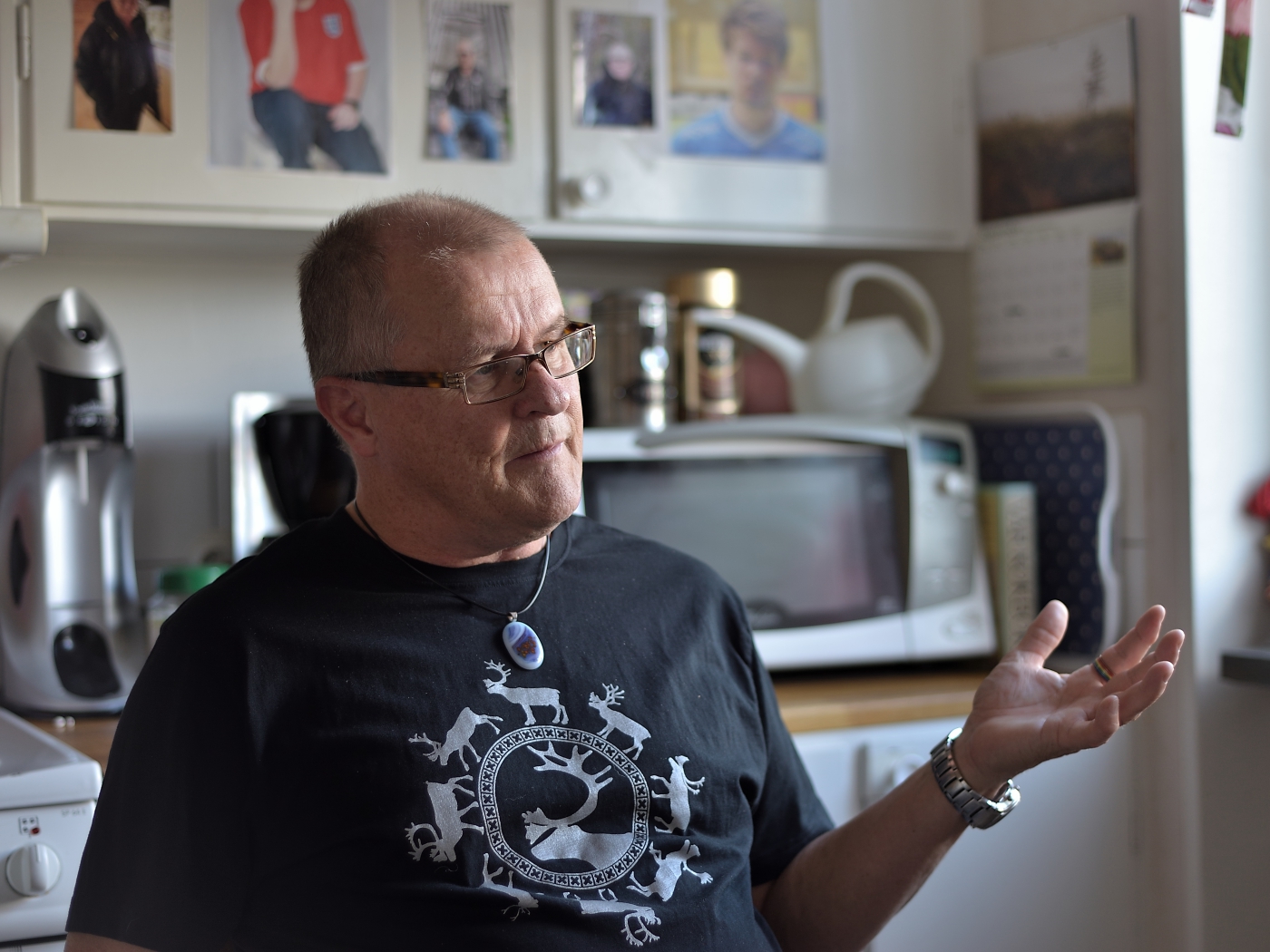 Dan Eriksson feels a joy of life and keeps his feet on the ground. But this has not always been the case. The turn came when he finally dared to be himself. Photo: Peder Lundkvist

When describing himself as a small boy, Dan Eriksson tells that he was a happy and wild boy, who became interested in singing already in Sunday school.

«Our mother was at home and she took good care of us. But I ran into trouble when still young.»

In puberty and in his teens, Dan found himself being more interested in boys than girls. It was an instinct he tried to suppress as long as possible.

«I was full of my own prejudices,» he explains.

Dan moved in with a woman, and they got two children. He had a good job and was active in sports.

It worked in a way. But Dan did not feel good. His mental health issues became worse and worse, and, during this period, he suffered from psychoses, depression and social phobias.

«The worst thing was the social phobia. I tried to figure out what was wrong with me. I wondered if people could see that I was gay, and when I met young boys on the street I expected them to call me a stinky faggot. If you have a problem you can’t talk about, it will grow and just go round and round in your head like a satellite. That’s how it was for me. Finally, I couldn’t take it anymore. I was terrified.»

Dan was in low spirits and his joy in life faded and disappeared. Finally, Dan Eriksson felt that he only had one alternative – to end his life.

«I thought about it for years. I tried to decide how to do it. Sometimes when I was driving I thought that if a saw a truck coming I’d steer to the other side, into it. Or I thought that I’d go out on the balcony and jump head first to the asphalt. Or swim out into the sea and drown myself. You feel this pain, you feel this terrible pain inside; it’s almost impossible to put it into words.»

As a result of these thoughts, Dan took an overdose of sleeping pills one night when he was at the summer cabin together with his family.

«You get to the point where you no longer have the energy to think about the children and your near relatives. How can you do that when you’re too tired even to live with yourself? A person who takes his life is the most lonely person in the world,» Dan says.

But life did not end there. Dan Eriksson was taken to hospital, and when he woke up in the intensive care unit, at the age of forty, he only had one wish in his mind.

The resources of society are not always enough in the kind of situation Dan Eriksson was in.

«When I felt worst it wasn’t enough to have therapists – therapy only helps if you want to speak. I didn’t have anything to talk about, I didn’t even want to live. But I did jog, even when I was doing really bad. Running gave me a burst of endorphins, and it felt good to sweat and get my pulse up.»

Some years later, Dan made a new attempt to end his life with pills. That time, he was alone. But right after swallowing the pills he called a last phone call – to a woman she describes as his very best friend: Edit, who is now 86 years old.

«My ex-mother-in-law, an absolutely fantastic human being. She understood right away what was going on and got help for me so that I survived.» 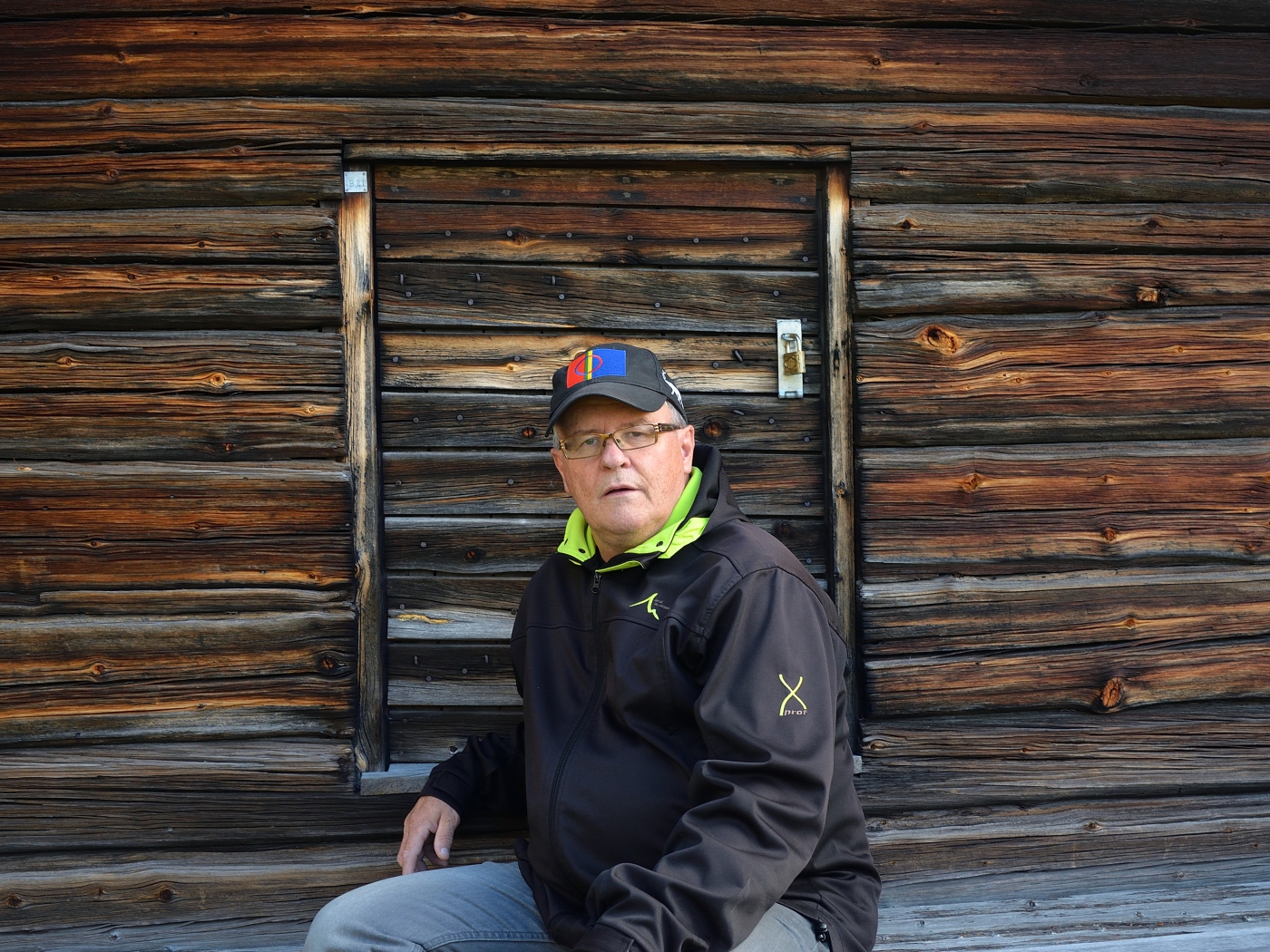 It took two suicide attempts before Dan Eriksson began to live as the one he is. After years of denial and mental health problems, he now feels happy and wants to help others understand how important it is to dare to be oneself. Photo: Peder Lundkvist

Today, Dan Eriksson lives alone. He has been diagnosed with bipolarity and needs lithium medication to keep his illness under control, but he is happy.

«I only sit here because I opened my mouth and started talking. I know that “happy” is a big word for many people, but not for me. I’ve gone through hell, but I’m glad about the things I experienced during that period of my life. This may sound weird, but that’s how it is. What kind of life would it be if you only lived a stagnant life and never developed and changed?»

Dan’s spouse was not especially surprised when Dan told her about being gay. They are still good friends.

«As a matter of fact, she already knew everything before I told her; women can see right through us men and know more than we think.»

After that, Dan told about his sexual orientation to his two sons, his siblings and his friends.

At present, he tells about his orientation to everyone who wants to know and gives speeches on how important it is to talk and to accept yourself.

No-one, not a single person, has reacted the way Dan Eriksson expected before he found the courage to come out.

«I was held back by my own prejudices. But I neither can nor want to be anyone else than the one I am. Now, I want to make use of my experiences and help others by telling my story, by listening to the ones who need to talk, and by asking every now and then people whether they have “suicidal thoughts”.»

Dan has been there twice. He has had those thoughts about ending his own life, but he also has experience of being a close relative to one with such thoughts. His older brother Anders took his life at the age of twenty-four.

«God, how many questions a suicide leaves behind, and how many people it affects. You’re shocked, you search for reasons, you blame yourself. But the decision is actually made by the one who commits it.»

At present, Dan Eriksson works as a volunteer in the non-profit organization Suicide zero. There, he tries to increase awareness of suicide as a social problem, but his speeches are deeply personal.

«I don’t have a manuscript; I rely on experience. I don’t want to dwell on what I’ve gone through; I do this to honor my brother and because I know that there are many who are in the kind of situation I was in. According to statistics, 1500 persons commit suicide in Sweden every year. It’s four per day, which is much higher than the death toll of traffic accidents. We must talk about suicides, we must find the courage to ask questions, and we must listen.» 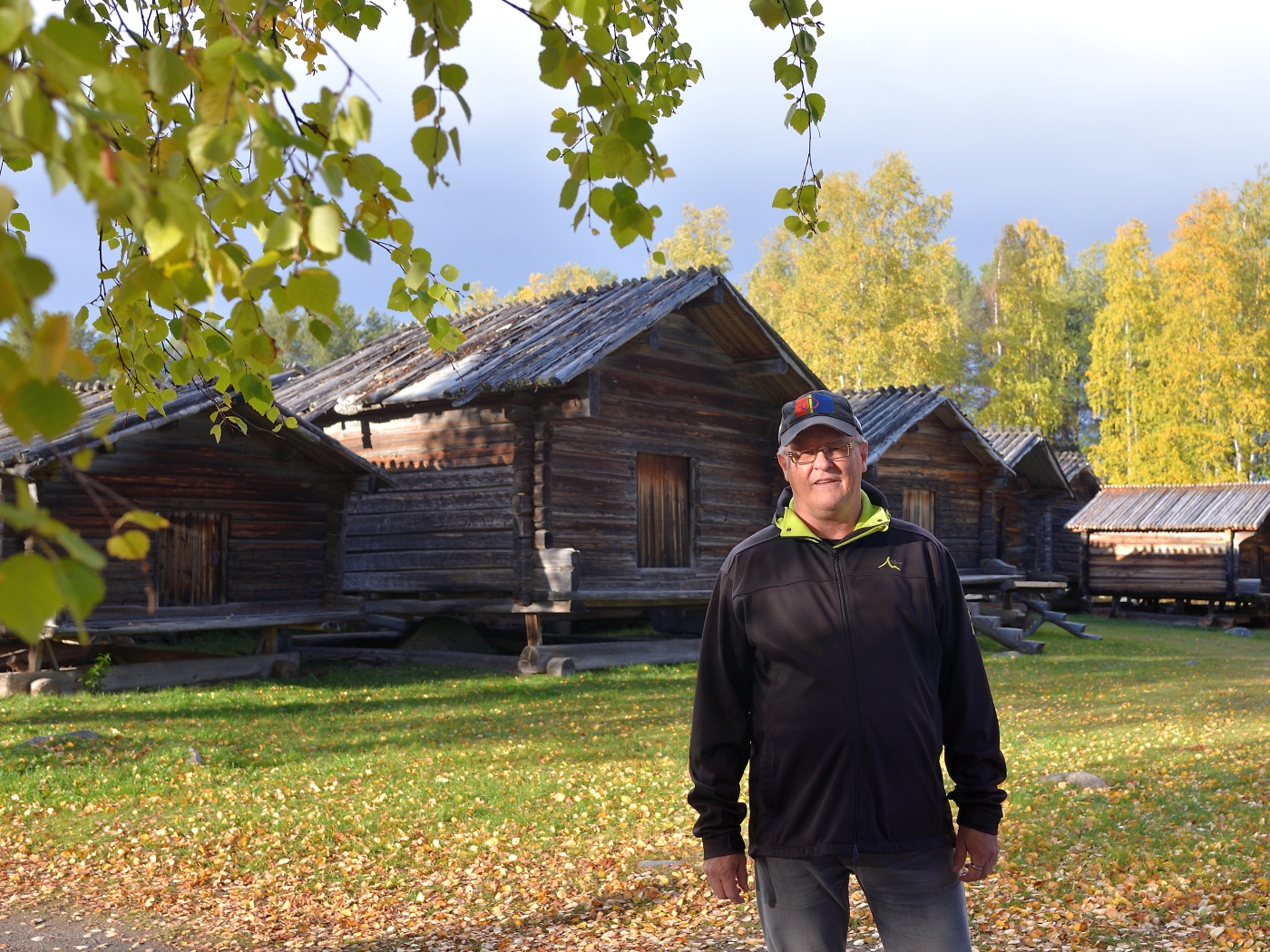 Dan Eriksson has not considered his Sámi background an important issue. But he has now become interested in his origin and likes to direct his words to the Sámi as a group when giving speeches on homosexuality and suicide. – As a man in the Sámi community, you feel the pressure to be strong and to cope on your own. But it’s not wrong to show that you can be weak sometimes. Photo: Peder Lundkvist

Dan Eriksson’s interest in his Sámi background has grown gradually. He considers himself a Sámi, but does not feel that this would have influenced his life in a special way.

«I’m Sámi and I’m proud of it, but it has neither been nor is very important for me. My earlier experiences on what being Sámi meant were mostly about conflicts, both internal conflicts between Sámi, and conflicts between the Sámi and the rest of society. We need to agree on things, as there is, after all, so much to take into consideration: the authorities, the grazinglands, economy… And, as a man in the Sámi community, you feel the pressure to be strong and to cope on your own. But it’s not wrong to show that you can be weak sometimes.»

Dan Eriksson likes to direct his words at the Sámi as a group when giving a speech.

«I’m part of the Sámi community, and I want to be a catalyst for change and inspire to discussion on both suicide and homosexuality in this community. But, above all, I’d like to reach men with my speeches, any men, wherever they have their roots. Men are overrepresented in suicide statistics, and, unfortunately, the most difficult ones to reach.»

The advice Dan Eriksson wants to give to those who have difficulties coping is short and clear:

The advice to those who have a feeling that someone has difficulties coping is equally short and clear:

«It’s incredibly important. We must talk, we must listen. We don’t need to understand, but we must take care. And every now and then we must dare to ask: “Do you have suicidal thoughts?” It’s difficult, but it’s dangerous not to talk about it.»

Translated from Swedish by Kaija Anttonen

This story is originally posted by Arjeplognytt and translated and re-published as part of Eyes on Barents, a collaborative partnership between news organizations and bloggers in the Barents region