Unique criminal case in Finland: Sámi base their fishing violations on constitutional rights 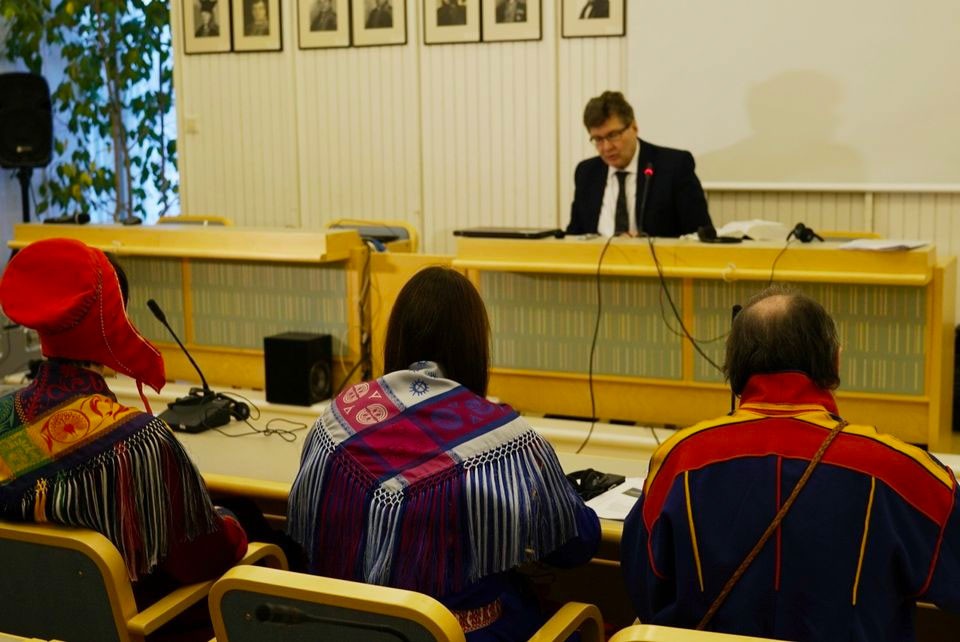 The Court of Lapland began hearing the case on illegal fishing in the Utsjoki Municipality Hall on 14 February 2019. Photo: Vesa Toppari / Yle Sápmi

At the Utsjoki Court, five Sámi have been accused of fishing offences. They base their fishing on their right to practice Sámi culture – a right pursuant to the constitution of Finland.

Fishing without a licence on the River Tana is the first criminal case in Finland in which the traditional rights of Sámi are used as justifying grounds for an offence.

In the summer of 2017, five people broke intentionally and as a protest the Finnish fishing regulations by not accepting the new fishing regulations. The four fishers who fished with a rod and a reel without a relevant fishing licence from Metsähallitus in the River Vetsikko are charged for fishing without a licence. The fisher who fished with a gill net in the River Utsjoki after the lawful fishing period is accused for a fishing violation.

At the courts session held in mid-February in Utsjoki, the accused denied having conducted any violations. They base their statements on the constitution of Finland.

The constitution guarantees Sámi as an indigenous people the right to maintain and develop their culture. The inhabitants of Utsjoki who are now being charged for illegal fishing and a fishing violation base their deed on their claim that fishing is an essential part of Sámi culture.

«This is a unique criminal case. This justification has earlier been referred to in cases dealing with land and real estate rights and in other civil cases, but this is the first time when it is used in a criminal case,» says lawyer Markku Fredman, who represents the accused who have been charged for fishing without a licence on the River Vetsikko.

Prosecutor Anita Haapakoski confirms that the court case is special.

«I wonder whether there has ever been such a case in the criminal court. This is a unique situation,» prosecutor Anita Haapakoski says.

According to the prosecutor, it is a good thing that a court now has to weigh two consitutional issues: responsibility for the environment, which here mainly concerns the protection of the Atlantic salmon, and the right of the Sámi to practice their culture.

«We have no precedents on such cases, and, therefore, the court must decide whether there is a need for stting a precedent in, for example, the Supreme Court. The decision will tell that,» Haapakoski reflects.

The court decision will be heard through the Internet at the Utsjoki Municipal Hall at 9 a.m on 6 March.

In the summer of 2017, five people from Utsjoki, Finland, fished in the tributaries of the River Tana without a proper fishing licence, and then reported themselves to the police in order to be charged. The lower court of Lapland began the hearing of the case in the Utsjoki venue on 14 February 2019.

The accused claim that, in the charge, the Fishing Act has been interpreted in a way that is contradictory to the constitution.

Section 17 (3) of the constitution guarantees the Sámi as an indigenous people the right to maintain and develop their culture.

The decision will ge given on 6 March 2019. The fishers have announced that they are prepared to appeal to international courts in order to change the Finnish fishing regulations.

This story is originally posted by Yle Sapmi and translated and re-published as part of Eyes on Barents, a collaborative partnership between news organizations and bloggers in the Barents region