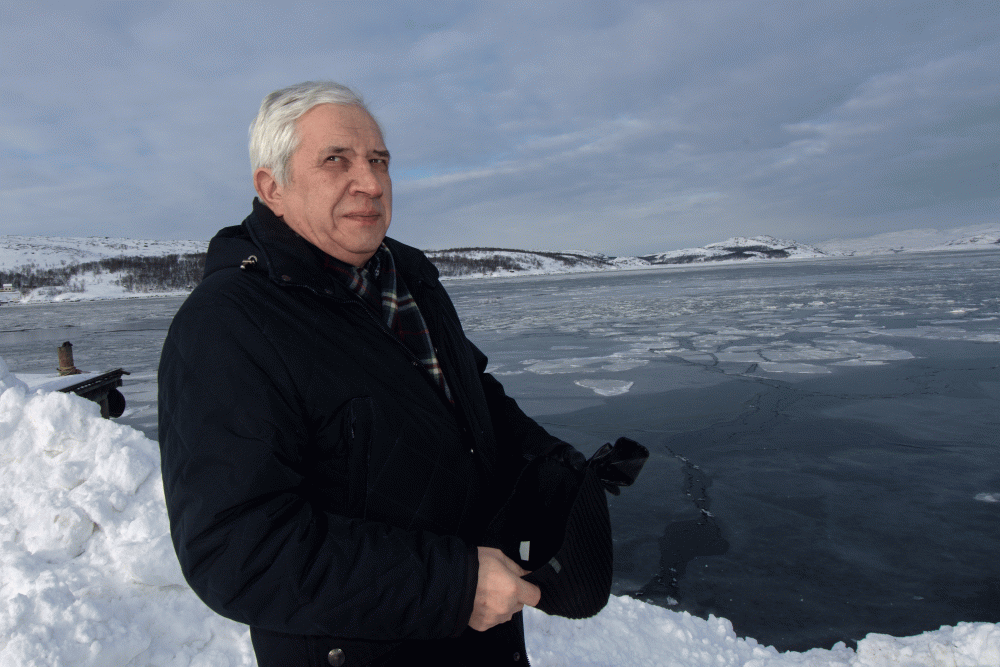 Rosatomflot’s service base is not sized for all the planned new nuclear-powered icebreakers, says Andrey Zolotkov, who previously worked as engineer onboard one of the service vessels storing spent nuclear fuel.

«So far, so good, but what if something goes wrong one day. Then questions will come in terms of why such operations take place within the city limits of Murmansk,» says Andrey Zolotkov, head of the autonomous non-commercial organization Bellona.

Before he started working for the nuclear safety watchdog group, Zolotkov worked for decades onboard «Imandra», a service ship storing spent nuclear fuel from the fleet of icebreakers. The vessel is berthed at Rosatomflot’s service base less than two kilometers north of the nearest blocks of flats in the Rosta district in Murmansk, a city with 300,000 inhabitants.

There are few cities in the world where more reactors’ maintenance work, change- and storage of uranium fuel, handling and storage of radioactive waste takes place within the boundaries of such big city.

«Look at the bases of the [military] Northern Fleet,» Andrey Zolokov illustrates. «There, all the maintenance and repair work with nuclear submarines take place outside and away from the towns where people are living.» 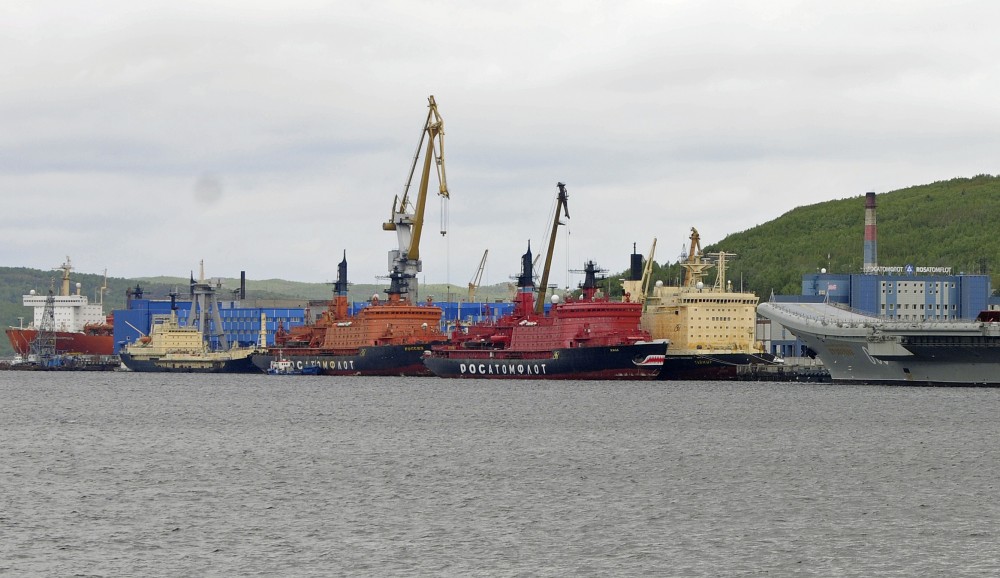 It is already crowded with vessels at Rosatomflot’s service base for nuclear-powered icebreakers in Murmansk. Photo: Thomas Nilsen

Every three to four years, the uranium fuel in the reactors of the icebreakers have to be replaced. Such high-risk operations are carried out with the most comprehensive safety precautions in the nuclear industry. Additionally, due to heat and high radiation, the fuel elements have to be temporarily stored for a few years before being transported away by train. At the base in Murmansk, such interim storage takes place onboard the two ships «Imandra» and «Lotta», as well as in spacial designed casks onshore.

An accident with release of radioactivity could reach densely populated areas in Murmansk long before anyone manage to trigger the emergency evacuation alarm.

«Considering the many new icebreakers coming the most risky parts of the nuclear maintenance operation should be moved further away from the city centre,» Andrey Zolotkov argues. He, however, underlines that there has never been any accidents at the service base.

Currently, Russia has four nuclear-powered icebreakers and one container carrier. Rosatomflot is the world’s only fleet of civilian nuclear powered vessels and when not sailing in icy waters, they are all moored at the quays in Murmansk.

The icebreakers keep the Northern Sea Route open for shipping and with the sharp increase in cargo predictedalong the north coast of Siberia in the years to come, the state-owned company both have several new and more powerful icebreakers under construction, as well as even more planned to be built during the next decade.

If funding is provided to built all icebreakers currently planned, and including those sailing today, the total number of nuclear-powered icebreakers could be more than doubled by the end of next decade.

According to an overview of the plans provided by Director of the Northern Sea Route Directorate, Vyacheslav Ruksha, the current icebreakers «Taimyr» and «Vaigach» will continue to sailuntil 2026 and 2027. The larger «Yamal» and «50 Let Pobedy» will sail at least to 2030 and 2039.

Three new 60 MW icebreakers are currently under construction at the Baltisky Yard in St. Petersburg. «Arktika» will be commissioned next year, while «Sibir» is scheduled for 2021 and «Ural» for 2022. The go-ahead for two more of the class were approved by Prime Minister Dmitry Medvedev on November 28th last year.

Then comes the giant Leader-class icebreakers, each with a propulsion power of 120 MW provided by two reactors of the RITM-400 type. Three such 209 meters long and 47,5 meters wide icebreakers are currently on the government’s tablefor how to meet the rising demand on the Arctic shipping routes. 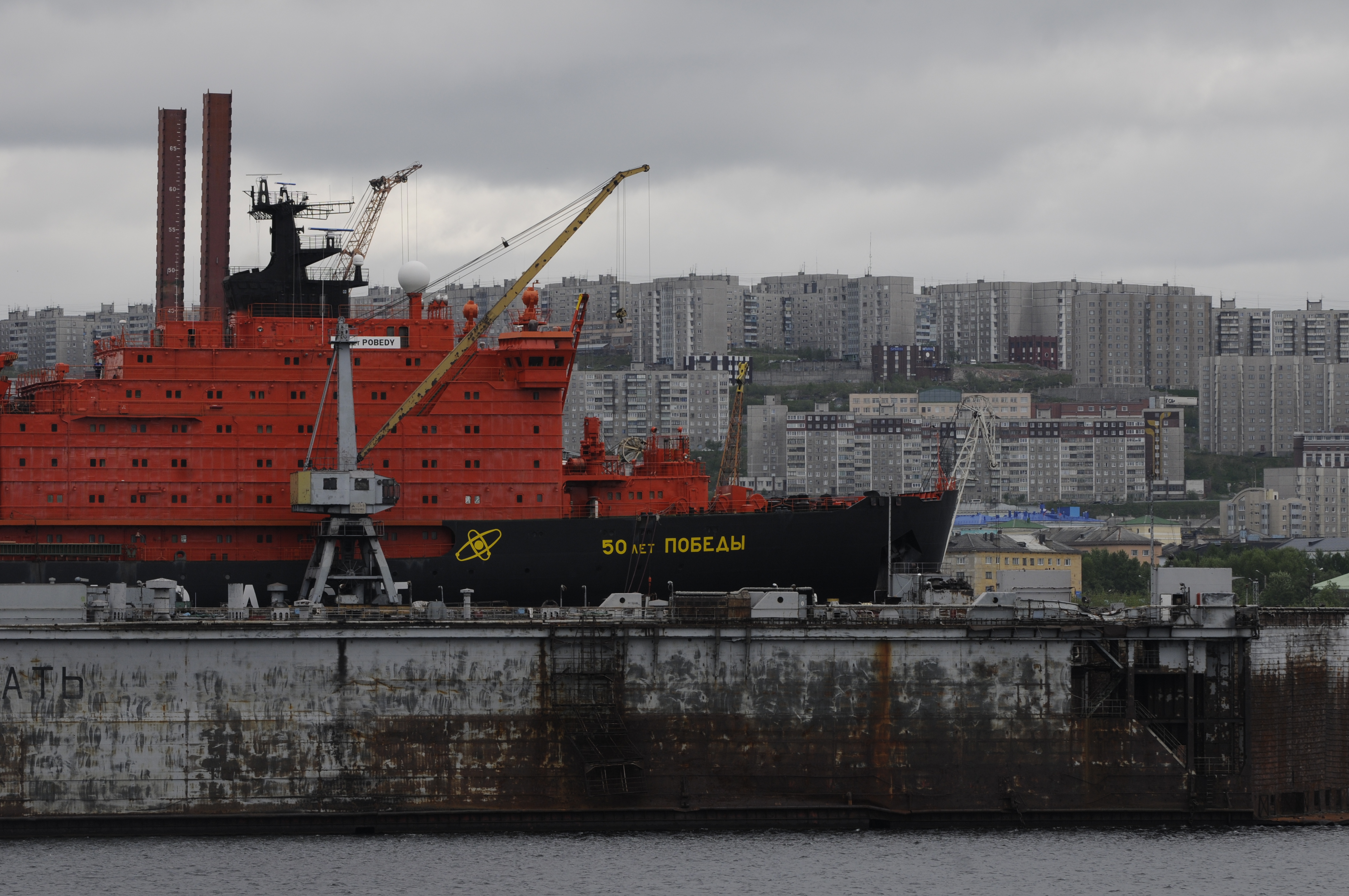 Due to lack of own floating dock, maintenance on the hull of nuclear icebreakers are done in the central harbor of Murmansk, only a few hundred meters from the blocks of flats. Photo: Thomas Nilsen

The service base in Murmansk is also used for other maritime nuclear operation. Since last summer, the «Akademik Lomonosov» has been moored at the base while loading of uranium fuel and testing of the floating nuclear powered plant’s two reactors take place. The plant will be towed to Pevek in the Far East this summer, but will likely have to return to Murmansk when major maintenance work is needed in the future.

Also, the base is the on location on the Kola Peninsula where spent nuclear fuel from the military fleet of nuclear-powered submarines can be reloaded to rail-wagons for transport out of the region. The special purpose vessel «Rosita» is shuttling between Andreeva Bay and Rosatomflot’s Murmansk base with the Cold War accumulated spent fuel elements. That work will likely continue  for at least five more years.

The train with the spent nuclear fuel drives straight through the city centre of Murmansk with its lethal cargo en route to Mayak, Russia’s reprocessing plant located in the South Urals.

«The mistake was made 50 years ago when Atomflot service base was created,» Andrey Zolotkov explains. In 1959, the Soviet Union had only one nuclear-powered icebreaker, the «Lenin».

«Now, it’s time to consider moving the most risky operations out of Murmansk.»